In the Spirit Realm, Grandmaster Oogway battles against an enemy named Kai, who has vanquished other kung fu experts in the realm and taken their chi, transforming them into little jade charms.

Oogway energetically gives in furthermore has his chi stolen, however not before notice Kai that the
Dragon Warrior, Po, will stop him. Kai takes this as a challenge to take the chi from the Dragon Warrior and comes back to the mortal realm.

In the interim, Master Shifu reports his retirement from educating to start his training to master chi and passes the part of educator to Po. Energized at to start with, Po finds that teaching kung fu is not as simple as he expected, as the Furious Five individuals Tigress, Crane, Mantis, Viper, and Monkey are harmed subsequently. Po is dispirited as an instructor, which makes him doubt who he truly is and whether he is the Dragon Warrior. Accordingly, Shifu advises Po that rather with respect to attempting to be an instructor, he ought to attempt to be himself.

Po returns home with his adoptive father, Mr. Ping, at his noodle shop, where a panda named Li Shan breaks Po’s dumpling-eating record. They both soon discover that Li is Po’s biological father and they bond with each other, much to Ping’s envy. Subsequent to acquainting Li with Shifu and his companions, the valley is assaulted by jade statues controlled by Kai and looking like past Kung Fu masters, a few of them long dead. The group then learns through research that Kai was Oogway’s old companion who battled with him as faithful comrades long prior. At the point when Oogway was harmed, Kai conveyed him until they reached a secret village of pandas, who mended Oogway using their chi. The pandas showed Oogway how to give chi, yet when the eager-for-power Kai chose to drain it from them to expand his power, Oogway crushed him and expelled him to the spirit realm. To vanquish Kai, Po must figure out how to ace chi himself, 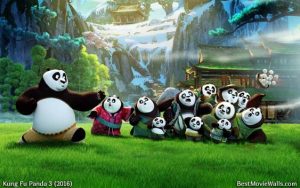 which Li offers to show him by heading off to a mystery panda village. Po, Li and Mr. Ping go to the town while Shifu and the Furious Five stay behind. In spite of the fact that Po is enthusiastic to learn chi, he first takes in the relaxed life of a panda in the village, which he feels thankful to be a part of.

Subsequent to discovering that numerous Kung Fu masters are missing, Shifu sends Crane and Mantis, who meet with Master Bear, Master Croc and Master Chicken en route, to find Kai, who takes all their chi. Kai then touches base at the Jade Palace and devastates it, yet not before taking the chi of Monkey, Viper and Shifu, while Tigress breaks to caution Po. Apprehensive, Li and the pandas plan to flee. At the point when Po requests that Li show him how to use chi, he admits that he doesn’t know how, and that he lied so he wouldn’t lose his child once more. Harmed over his dad’s confusion, Po segregates himself and trains overwhelmingly to confront Kai. Mr. Ping admits to Li that he was at first stressed Po would be detracted from him, yet understood that Li being a piece of Po’s life 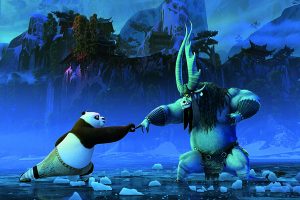 essentially added to his satisfaction. Tigress defies Po and
lets him know that he can’t vanquish Kai without keeping on finding the mystery of chi, amid which Po admits that the experience has him afresh questioning his potential. Li and the villagers, having chosen to stay, request that Po train them so they can battle back. Acknowledging what had already made him flop as an educator, Po concurs and shows them using their ordinary activities as their advantages.

Kai arrives and sends his jade statue missions to capture Po, however they are held off by the pandas and Tigress, diverting Kai. The arrangement works in holding off the armed force, however when Po tries to usa the Wuxi finger hold on Kai to send him back to the Spirit Realm, he uncovers that it can just

work on mortals, not a soul warrior. Kai picks up the high ground in their battle, yet Po uses the Wuxi finger hold again on himself while gripping Kai, transporting them both to the beyond. They battle once more, with Kai recapturing the favorable position to stifle, and he starts petrifying Po. Using what they gained from Po and about their identity, Li, Tigress, Mr. Ping and the pandas can use their chi to spare him. Po then turns into an ace of chi subsequent to acknowledging who he truly is and uses his chi to make a giant dragon figure which he uses to over-burden Kai, making him detonate, killing him and restoring all the fallen masters to typical and transporting them back to the mortal world.

In an golden pond, Grandmaster Oogway appears to Po, and advises him his adventure has turned up at ground zero, uncovering his part by selecting Po as Dragon Warrior beacause of his decent from the ancient pandas, and his emdobiment of the yin-yang. He additionally uncovers his part in cautioning Li to Po’s survival, and pronounces Po his actual successor. By decision, Po yields a mystical green yin-yang staff presented by Oogway to come back to the mortal world. He and his extended family all return to the Valley, where they keep practicing kung fu and their chi under the direction of Po and the Furious Five.