Fa Mulan! Soul of Chinese’s Will of Fire! 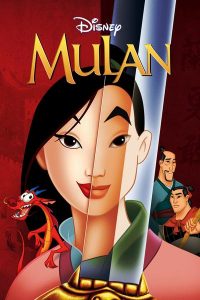 Please do not ask me if I
post another movie of Walt Disney Animation. It is just simply because I like most of them, especially the animation movies in the 1990s. Today, I will also introduce to you even if you already know it or not, an animation about a brave Chinese girl named Fa Mulan, who makes
all people give her admiration and respects. 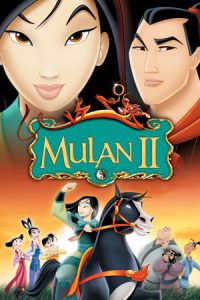 The opening of this story tells you about a person with the name Shan Yu, general of the Huns, carries his army forces to invade China.
Facing the risk of a big fight, Chinese Emperor orders a general mobilizati
on. The notices or Military Services ask for a man of each family to join the Chinese Army. A man named Fa Zhou who is the only man and a veteran in a family with the conscription, tries to put on him the armor and is one more time going to war, his daughter named Fa Mulan

is afraid that he is going to lose his life on the battle field. She decides to disguise as a man, then puts on her father’s old armor and enlists instead of her dad. Her family realizes what is going on and starts worrying about her, meanwhile her grandma Fa pray for Mulan’s safety to the ancestors. The ancestors of course hear that an order Great Stone Dragon to protect Mulan. Unfortunately, Great Stone Dragon is not a living entity, so another dragon, small like a chopstick and named Mushu, is assigned to take care of Mulan.

The training camp of Chinese Army is supposed to 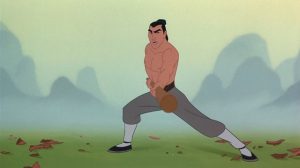 train recruits and turn both the amateurs and skillful ones to true soldiers. The first step of Mulan in the training camp is hard because she does not know how to behave like a man, which also gets worse when she has some provides from Mushu. However, under the guidance of Captain Li Shang, she and her fellow recruits Yao, Ling, and Chien-Po, step by step become professional warriors. As a desire to see Mulan being successful, Mushu makes a fake order to Shang as if it is from his father, General Li, telling him to join the Imperial Army into the mountains. Sadly, Shang soon recognizes that the Huns already made an extermination on General Li and is army force. The Huns actually wait for Shang’s troops to be i 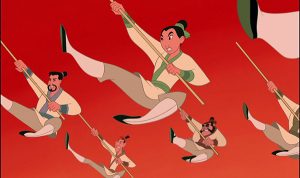 n that place and ambushed. As facing the risk of losing the fight, an avalanche is created by clever Mulan and her cannon to bury most of the invaders. Shan Yu still has time to give Mulan a slash on her chest, which reveals her true
identity as a girl to Capt Shang. She must have been under sentence of death as the laws say, but Shang spares her life and dismisses her from the army. Mulan still follows the army to the Imperial City to report the Huns’ destruction, although she is no longer allowed to. She wants to warn Shang about the fact that some Hun warrior including Shan Yu are still alive after the avalanche and planning to capture the Emperor when they arrive to the City.

Shang is still thinking what Mulan said is a lie until Shan Yu’s intention
is accomplished with the mission of capturing the Emperor and seize the palace. Mulan and 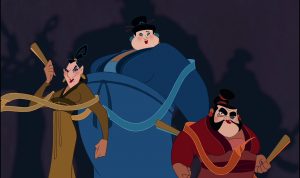 her three friends, Yao, Ling, and Chien-Po under the makeup of concubines, help each other to enter the palace. With the participation of Shang in preventing Shan Yu from assassinating the Emperor, Mulan is able to isolate Shan Yu and engage him in solo fight. The little dragon, Mushu, really does a good jop from observing Mulan’s signals to finally release a bunch of burning fireworks at Shan Yu. And you know the result, Shan Yu dies as the time people in the Imperor City are enjoying a show of flourishing fireworks. The Emperor and all people in the city bow and praise to her in an unprecedented honor. Neverthless, facing the important decision which is to be the Emperor’s advisor (with his offer), Mulan politely 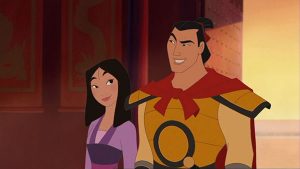 refuses it and asks to return to her family. Mulan is also awarded with Shan Yu’s sword and shows it to her father when she gets home, but he is more jo
yful to know his daughter is safely coming back. Shang actually has feelings with Mulan. he uses her helmet as a reason of coming to her house to return it, and accepts the family’s invitation for dinner. Mushu proves a good work for family ancestors and becomes the Fa family guardian.

2 thoughts on “Fa Mulan! Soul of Chinese’s Will of Fire!”