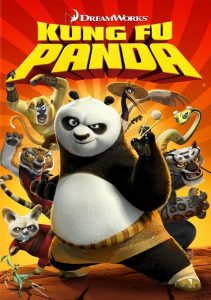 Kung Fu Panda season I is an America animation produced by Dreamworks Animation and distributed by Paramount Pictures in 2008.

The story is set in the Valley of Peace, an land of fiction in ancient China possessed by human-like creatures. A giant panda named Po, is a huge fan of kung fu and idolizes the Furious Five; Tigress, Monkey, Mantis, Viper, and Crane; a quintet of kung fu understudies trained by the red panda Master Shifu. As he helps his adoptive father, a goose, Mr. Ping in his noodle restaurant, Po can’t seek after his fantasy of turning into a kung fu master himself.

Grand Master Oogway, an old tortoise and Shifu’s tutor, has a dream that Shifu’s adoptive child and

previous understudy, the evil snow panther Tai Lung, will escape from jail and come back to the Valley of Peace to deliver retribution for being denied the Dragon Scroll, which is said to hold the key to boundless power. Shifu is frightened and sends his messenger, the goose Zeng, to avert Tai Lung’s escape. He then holds a kung fu competition for the Furious Five in order for Oogway to recognize the Dragon Warrior, the one kung fu master deserving of accepting the Dragon Scroll and fit for beating up Tai Lung. Compelled to take a lumbering noodle truck to the competition, Po touches base as the field entryways close and can’t enter. Edgy to see the Dragon Warrior picked, Po straps himself to an arrangement of firecrackers, rockets into the sky, and crashes into the center of the arena and opens his eyes to see Oogway pointing his finger at him. To the crowd’s shock, Po’s perplexity, and the Furious Five’s daunt, Oogway broadcasts Po as the Dragon Warrior.

Trusting Oogway’s choice to be a misstep, Shifu tries to dispose of Po by criticizing him into stopping kung fu training coupled with an unbearable training mode. The Furious Five comparatively taunt and hate Po as an upstart with no skill in kung fu. In the wake

of accepting support from Oogway, Po perseveres through his difficult training and gradually starts to get to know the Five with his determination, culinary skill, and good sense of humor. In the interim, Tai Lung escapes from jail as predictted by Oogway, picking his locks with one of Zeng’s feathers. Shifu has been alerted about Tai Lung’s escape by Zeng and informs Oogway, who encourages Shifu to have faith in Po and after that ascends to the sky in a cloud of peach blooms. Still not able to get a handle on the basis of kung fu, Po despairingly concedes that he has no way of vanquishing Tai Lung. Shifu, be that as it may, finds that Po is fit for noteworthy physical deeds when inspired by food. Utilizing sustenance as encouraging reinforcement, Shifu effectively trains Po to join these accomplishments into a viable kung fu style. 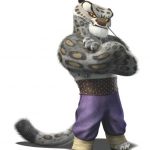 At the same time but in another area, the 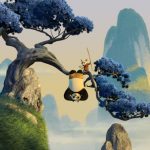 Furious Five set out to stop Tai Lung themselves, just to be overpower
ed and vanquished by Tai Lung’s nerve strikes. Shifu chooses that Po is prepared to get the Dragon Scroll, however the parchment uncovers only a blank reflective surface. Trusting the look to be pointless, Shifu orders Po and the Five to clear the valley. As Tai Lung arrives and battles Shifu, the distressed Po discovers his dad who, trying to support him, uncovers that the long-withheld mystery ingredient to his favorite “mysterious ingredient soup” is “nothing”, clarifying that things get to be uncommon in the event that they are accepted to be. Po understands that this idea is the whole purpose of the Dragon Scroll, and does a reversal to defy Tai Lung before he can kill Shifu.

Po turns into an impressive chalenge for Tai Lung as he guards the Dragon Scroll, with an irregular 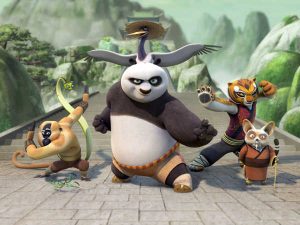 battling style that confounds and disappoints his rival; Tai Lung’s generally debilitating nerve strikes don’t influence Po because of his body fat. Tai Lung quickly bests Po and retrieves the parchment, however can’t comprehend or acknowledge its symbolic meaning. In the long run, Po massacres Tai Lung in battle before utilizing the baffling Wuxi Finger Hold to finish him off once and for all. Po is lauded by the Valley of Peace and acquires the regard of all the Furious Five, who completely recognize him as a genuine kung fu master. Po then finds Shifu, who at last achieves internal peace with the valley safe yet again.